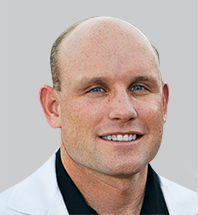 Dr. William J. Robertson is a specialist in sports medicine injuries, as well as, the arthroscopic and open management of shoulder, knee, and hip disorders. He currently serves as the Head Team Physician to the Dallas Stars NHL Hockey Club, Dallas Defenders Semi-professional Football Team.

Before joining the Texas Metroplex Institute for Sports Medicine & Orthopedics (TMI), Dr. Robertson spent 7 years at UT Southwestern Medical Center where he was the Chief of the Sports Medicine & Shoulder Service. As an Associate Professor of Orthopedic Surgery, Dr. Robertson helped train the next generation of Orthopedic Surgeons at both UTSW and Parkland Hospitals. There, he received teaching awards by the UT Southwestern Orthopedic Residents on two separate occasions.

Dr. Robertson performed his undergraduate education at Brown University where he was also a four-year letter winner as a starting linebacker for the Brown University Football Team. Following his senior season, he was selected to play with other Ivy League All-Star's in the Epson Ivy Bowl in Osaka, Japan. He later went on to medical school at the SUNY Downstate Medical Center in New York City and served as president of the Alpha Omega Alpha Medical Honor Society. He graduated 1st in his class and received the Chancellor's Award for Student Excellence from New York State.

Dr. Robertson completed his orthopaedic training at the prestigious Hospital for Special Surgery in New York City which is consistently named the #1 hospital in the United States for orthopaedics by U.S. News and World Report. There, he received the Distinguished House-staff Award by Weill Cornell Medical Center for his exemplary all-around patient care. He performed a traveling fellowship to the Balgrist and Schulthess Clinics in Switzerland, where he studied the treatments for hip joint preservation and femoroacetabular impingement from Professor Reinhold Ganz.

Following his residency training Dr. Robertson completed a sports medicine and shoulder reconstruction fellowship at the Harvard / Massachusetts General Hospital where he had the opportunity to serve as an assistant team physician to the New England Patriots, Boston Red Sox, Boston Bruins, and several other collegiate and high school teams. Dr. Robertson is the author of over a dozen peer reviewed articles, book chapters, videos and presentations involving orthopaedics. He is an active member of the American Orthopaedic Society for Sports Medicine (AOSSM), the Arthroscopy Association of North America (AANA), and the National Hockey League Team Physicians Society (NHLTPS). He is a co-founder of the Southwestern Initiative for Sports Health (SWISH), whose goal is to improve the management, prevention and awareness of sports injuries through educational conferences, journal clubs, and collaboration with other healthcare professionals in the Dallas/Fort Worth area. His goal is to provide his patients with the highest level and quality of care, using all of the latest techniques and available research, in an effort to expeditiously restore their function and alleviate their pain.